Coriandrum sativum
A polarizing herb, Cilantro inspires feelings on both sides of the fence.  Some people love it, some people hate it.  Whatever your feelings, we can still appreciate the flavors that this herb brings to the party.

Cilantro is a unique herb that goes by a a few names, Cilantro, Chinese Parsley and Coriander.  The leaves are typically the part called Cilantro and are used mostly fresh.  Typically the berries of the plant are dried and sold as Coriander in either seed or ground as a powder.  While they come from the same plant, the seeds bring a little more subtle flavor, more in line with Cumin.

STYLES
Cilantro is an herb that is found in many cuisines from Middle Eastern, Asian, Mediterranean, Indian, Mexican, Chinese and Caribbean cuisines.  It is native to most continents and is one of the first herbs that was cultivated to be used as an herb. 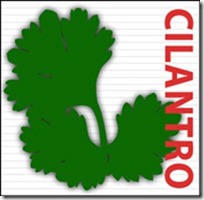 FLAVOR PROFILE AND USES
The flavor of Cilantro is very unique.  It brings a light lemon/lime flavor with a brightness that lends itself well to acidic foods.  Cilantro’s flavor will deteriorate as it is heated, so it is an herb that is best added just before a dish is finished.

Use with fish, chicken, and other light foods.  It is commonly found in salsas and marinades from Latin American dishes, to being pureed and used as a pesto-like dish called Chimichurri.  (Garlic, Olive Oil, Vinegar and pepper).  Also a big component in Indian cuisine, bringing a lot of flavor to dishes like Masala and other curries.

FRESH vs. DRIED
This herb, being one whose flavor is relatively fresh and bright, also happens to have flavor that is delicate.  Much to McCormick’s dismay,  I cannot recommend using this in its dried form.  I have even tried to dry it myself, but it just does not keep its original flavor close to what the fresh version is like.  If you need to use something, I would add in some lime juice and substitute ground Coriander in a pinch.  Don’t waste the valuable room in your spice drawer with the dry version.

STORAGE
To keep fresh herbs longer, wrap them in a wet towel and store in the the warmer parts of your refrigerator, not the coldest.  On your counter in some water will give you a few hours, but not much more.   If you have to keep for extended times, chop fine or make Chimichurri, and freeze in single serve size bags.  It will keep for up to three months.

GROWING IT AT HOME
Growing Cilantro can be a bit difficult, compared to much more prolific herbs like Basil.  I found that Cilantro, in my Northeast climate, provided a decent amount of leaves when cut back periodically and kept from growing flowers.  It really did not last too long, and replenishment was slow.  So I would say, this is a great herb to buy in the store.  Also be sure to wash it, as it tends to favor growing low, and in sandy soils.

So give Cilantro a chance, and add it to your culinary quiver!
Chris

This entry was posted in Herbs & Spices and tagged Cilantro, Herbs. Bookmark the permalink.